Hair is our natural crown and most people will say they are affecting their confidence as well which is why we want them to be thick and healthy to look great. Unfortunately there are various hair issues which affect the overall appearance such as hair loss due to internal and external factors. To help address the condition, hair loss shampoos like Lipogaine Vs Regenepure are tailored with special formulations which have been benefiting so many users already. If you are curious as well, let’s see what these shampoos can offer.

In this comparison, we are going to talk about:

Hair loss is something that many of us have suffered before or even now and the stressing part is we often don’t know what triggers the condition or whether they will be cured on its own or need professional care. In many cases this can be triggered by either internal or external factors but in comparison there are also those that can grow back after a while and some conditions where it gets worse and ends up to a balding point.

The most common type of hair loss is gradual thinning from the top of the head and usually affecting people as they grow older. In men, the hair often begins to recede at the hairline or the forehead area while women on the other hand typically have a broadening of the part in their hair or more random and happens at any spots. On older women however, the usual pattern is receding hairline as well or frontal fibrosing alopecia.

The second common hair loss sign is circular or patchy bald spots where some people lose the hair in circular or patchy bald spots on the scalp, eyebrows or their beard. In some cases the skin can become uncomfortable and itchy too before the hair falls out. Sudden loosening hair on the other side is usually due to physical or emotional shock which causing the hair to loosen. In this type of hair loss we may find it after shampooing or combing where a handful of hair strands come off from the scalp yet, in general they are not long lasting or will grow again later.

In some medical treatments, there are conditions where a patient is losing all of the hair in their body which is pretty common when doing chemotherapy for cancer. This not only happens on the scalp but as the patient is cured and stopping the treatment, the hair usually grows back. In addition, there is this condition due to ringworm where you will see patches of scaling that spread across the scalp and usually they are accompanied by broken hair, redness or swelling and at times it can be oozing as well.

We do recommend visiting your doctor if the issue is persistent and to prevent the condition from becoming worse or ending up in permanent baldness. It is also wise to start seeking professional help when you notice the hair fall more often than usual and whether it happens to you or your loved ones, in some cases this can indicate an internal problem or triggered by some health issues that need proper treatment.

Sometimes we don’t really pay attention to hair loss because it is indeed a natural process or life cycle of the hair but it can get quite stressful as it becomes more prominent. If the cause is external damage, we can easily treat it with topical solution such as Rogaine Vs Kirkland minoxidil but if the issue is based on the internal factors like diet for example, trying some hair vitamins can be a great idea. On the lighter issue, we can start from changing the regular shampoo to those made for hair loss.

Shampoo is the basic of hair care and it plays an important role in affecting the overall hair health as well. Brands like Lipogaine and Regenepure are dedicating their products for people who are struggling with hair problems like hair loss with their own unique formulation. There have been many users who are garnering benefits after using these shampoos so it is promising to try one or both as well. In most cases topical solutions like shampoo are utilizing lots of beneficial ingredients which are known to address the issues.

Lipogaine for example is using a complex formulation to take care of the scalp because this is where the hair is growing so we need to focus on improving the skin health first for it to grow or regrow the hair. The one we choose today is the Big 5 but you can choose the Big 3 as well and they are similarly made for hair loss but the two do have different formulations as this Big 5 is safe for colored hair.

On the other hand the Big 3 has ketoconazole which is better if you also suffer from dandruff or infection related hair loss issues. Regenepure also has a full line of hair loss and they do offer two types of shampoo; the NT and DR. In this comparison we are talking about the DR variant since this is the one tailored to improve scalp condition while the NT is meant to moisturize the hair. You can alternate the two for best result however.

We are not sure whether all hair loss shampoos smells similar but the first impression with Lipogaine and Regenepure shampoos are they smells like typical anti-dandruff shampoos which use a combination of menthol in its formulation since this is what we smell when opening the cap; personally we have no problem with the refreshing scent. The shampoo itself has different consistency but the two are more on the creamy side. They do have very different colors however since Regenepure is minty green while Lipogaine is creamy white. 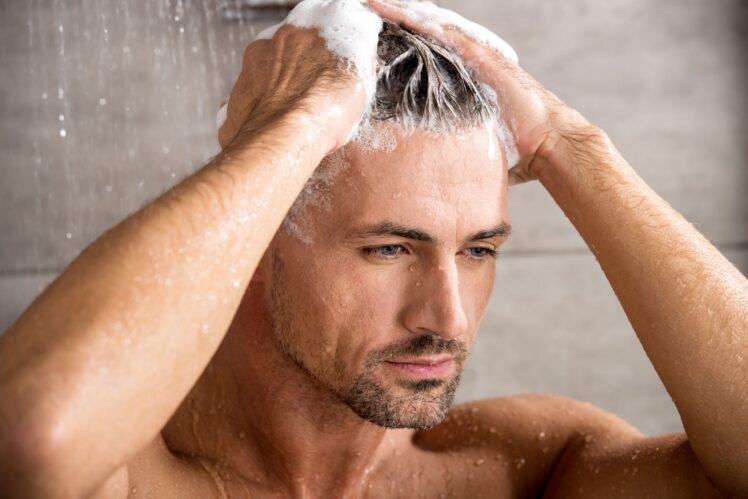 We only need to use a little bit of the shampoo to cover the head and a bottle can go a long way. They lather nicely with water and should be enough for a couple of months with routine use. Currently they are often sold from $25-$30 per 236 ml bottle so in general not as expensive as many high-end beautifying shampoos but also not the most affordable.

Next let’s pay attention to the ingredients list of Lipogaine and Regenepure because this is what is most important. The first thing we love from these shampoos is they are not using SLS which can be drying for some people and instead, they use ingredients like Decyl Glucoside and Coco glucose in the Big 5 shampoo or Disodium Laureth Sulfosuccinate and Sodium Cocoyl Isethionate on the Regenepure which are great for degreasing but is gentler on the skin to prevent it from creating imbalance environment.

Other beneficial ingredient are such as Argan oil, Ylang Ylang, Caffeine, Nettles extract, and Saw Palmetto Extract in Lipogaine while in Regenepure we see the similar ingredient like Saw Palmetto and Caffeine but also Emu Oil, Vitamin C, Ketoconazole, and Zinc.

Argan oil is often called the holy grail because they are very moisturizing but here it is also rich in antioxidants and fatty oils to help strengthen the hair strains and rejuvenate it. Caffeine on both shampoos have been studied to show a positive effects in stimulating hair growth while Saw Palmetto is natural DHT blocker which is why they are often found on hair loss shampoos especially those made for users who are suffering from hormone related hair loss and can be used by men or women. 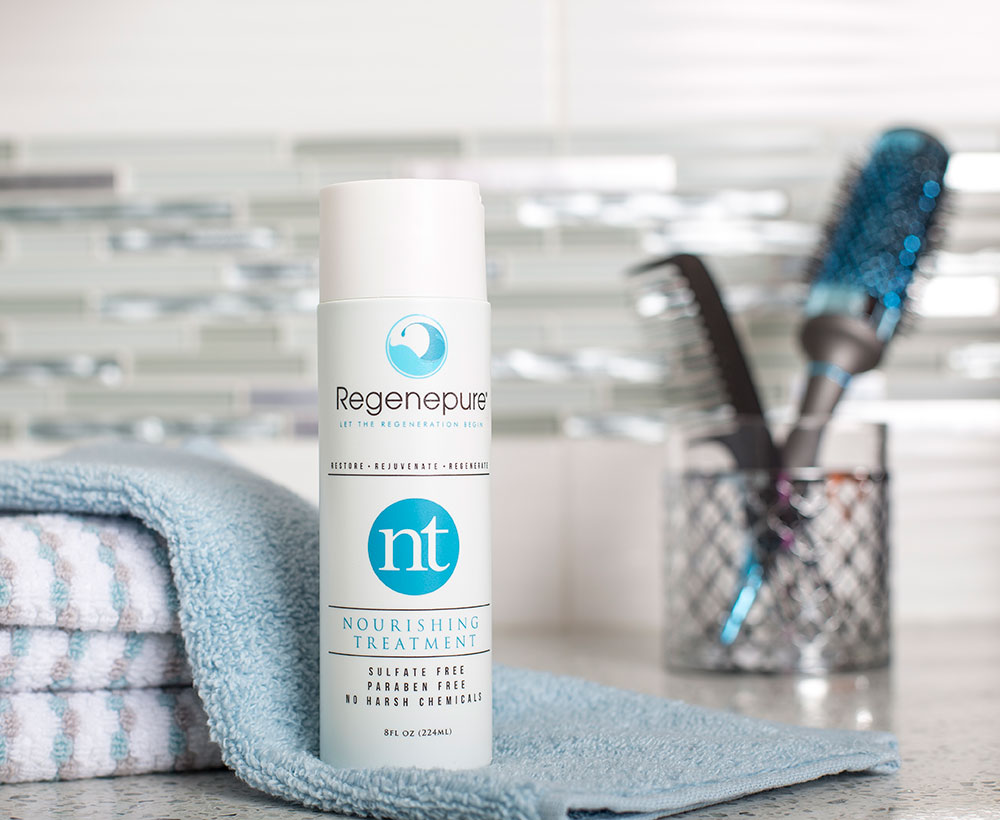 Emu oil in Regenepure is similar to Argan oil and in general even closer to our natural oil to help moisturize the skin or scalp. Vitamin C is known for its antioxidant while Ketoconazole is great for skin infection as well as handling dandruff problems, the same with Zinc. Ketoconazole itself can be purchased over the counter as well in various different forms such shampoo or salve and cream for skin conditions.

Lastly for the results after Lipogaine and Regenepure, in general they are very helpful. We see improvement with both shampoos by a little after a while and for some people the formulation can be more potent too, so the results are varying among users. What’s a bit different is that Regenepure has both Ketoconazole and Zinc which is great for people who are suffering from itchy scalp as well due to infection or dandruff such as fungal infection and flakiness.

These shampoos are not only beneficial but also comfortable when applied. The foam is soft and the scent is refreshing, at least we like the minty fragrance that makes the scalp feels clean and fresh before the next washing day. In comparison the foam of Regenepure is softer and richer however so it gives a more luscious feeling as we scrub scalp. It also works better if you have itchy scalp and dandruff problems.

Lipogaine
- Trusted Brand: Hundreds of thousands people around the world have been in love with Lipogaine products since 2009. Most people learnt the brand from their very satisfied friends.
- Premium natural ingredients based hair stimulating shampoo, strengthen & nourish hair and help prevent hair thinning & hair breaking. For both Men and Women with hair loss or thinning.
- Powerful proprietary blend of Biotin, Caffeine, Argan Oil, Castor oil and Saw Palmetto for the best volume and looking of your Hair
- Free of Harsh Chemicals.NO SLS, Color Safe.
Best Price Click Here
Regenepure
- COMBAT HAIR LOSS: A purifying shampoo treatment recommended by doctors to help stimulate growth leaving your hair looking and feeling thicker
- CLEANSES THE SCALP: Washes away debris and DHT buildup that can choke follicles and get in the way of growth
- THE FIRST STEP: Our nourishing formula prepares the scalp for healthy growth; Alternate with NT Shampoo and use the Regenepure Essentials Advanced Hair Loss Capsules with Biotin (not included)
- RESTORATIVE INGREDIENTS: Formulated with carefully researched ingredients such as aloe vera, saw palmetto, jojoba oil, emu oil, niacin, and vitamins B3 and B6
Best Price Click Here

You can go amazing with any of these shampoos because they are working really well in reducing hair loss. The two are not the same in formulation but similarly using plenty of useful ingredients in terms of preventing hair loss. But, if you also complain about itchy scalp, we do recommend the Regenepure DR shampoo.

hairmastic.net is a participant in the Amazon Services LLC Associates Program, an affiliate advertising program designed to provide a means for sites to earn advertising fees by advertising and linking to hairmastic.net (amazon.com, amazonsupply.com, or myhabit.com).

CERTAIN CONTENT THAT APPEARS IN THIS SITE COMES FROM AMAZON SERVICES LLC. THIS CONTENT IS PROVIDED “AS IS” AND IS SUBJECT TO CHANGE OR REMOVAL AT ANY TIME.

Iconic One Theme | Powered by Wordpress